Steve was raised on Australia’s island state of Tasmania, in Aussie fly fishing terms the equivalent of being raised in Montana. But he'll tell you he squandered his youth in the salt, surfing, diving, and fishing for all manner of species. Finally convinced in his late 20s to grasp a fly rod, an obsession was born. He cut his teeth on the challenging wild brown trout and rainbows of Tasmania’s wilderness lakes and streams before moving to the US in December 2000. A former journalist, Steve spent 3 years in the US as a traveling fly fishing writer and photographer, a job which saw him land, fly rod and camera in hand in Montana, Wyoming, Alaska twice, Baja, New York, Michigan, New Mexico, Idaho and finally Arkansas.

The experience in tackling North American conditions was invaluable as he fished the mayfly hatches of the Henrys Fork, Firehole and Au Sable, caddis hatches on the Big Wood, chuck and ducked beads on the Kenai, stripped streamers on the Beaverhead, splatted hoppers on Silver Creek, found himself tied to 40lb King Salmon on the Ayakulik, and roosterfish and snook in Mexico.

His articles and photographs have appeared in numerous publications and websites, including Fly Fisherman and Anglers Journal, and he remains a masthead columnist and regular contributor on tactics, destinations and fly tying with Australia and New Zealand’s premier fly fishing magazine FlyLife.

After flirting with guiding, and several job offers on his travels, Steve started guiding out of the Beaver Dam store, in '04 and ran the fly fishing department, building his knowledge of the White River system from Beaver to Norfork and a substantial and loyal guide clientele, before joining the Mountain River Fly Shop in Cotter in ‘07.

Despite a serious and extensive fly fishing resume, Steve’s laid-back Aussie accent and attitude, sense of humor and self-deprecating wit are appreciated by beginners and experienced fly fishers alike. His mantra is that fly fishing is meant to be fun whether you are catching the biggest fish of your life, tangling around the rod tip and everything in between.

He's also been known to describe guiding as like a "duck swimming across the pond" and all the hard work gets done our of sight to make the day as easy and relaxed as possible. 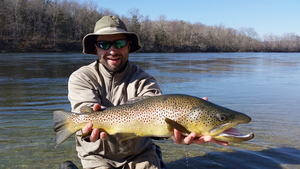