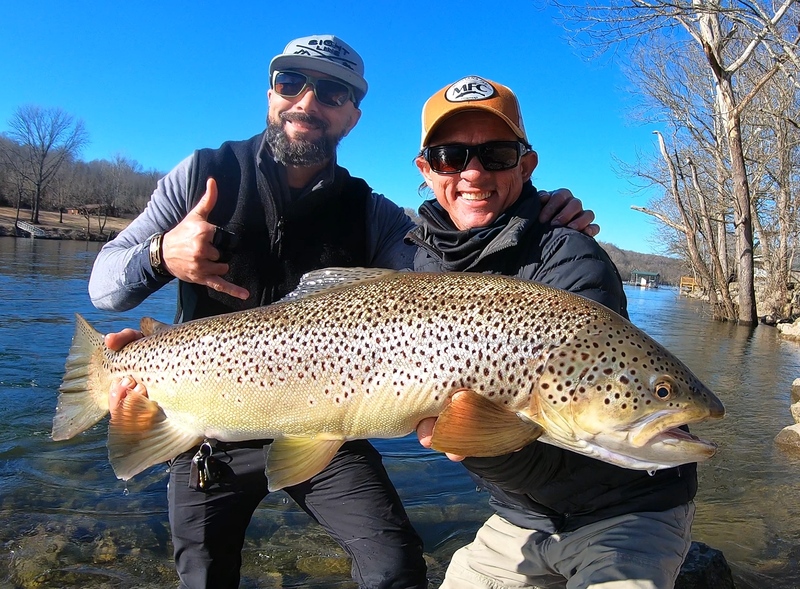 Hello fellow anglers, my name is Chad Johnson, born in Mississippi in 1973, with rod in hand. I spent the next 32 years in Crystal Springs.  My dad was an angler & raised me just a 4-wheeler ride away from two great warm water fisheries, where we spent most of our time fishing for Catfish, Bass, & Blue Gill but never with the passion that I have found in fly fishing.

I began coming to the White River area for the first time in the spring of 2003 to fish for trout and small mouth bass. That's all it took to get me hooked and I begin making as many trips as possible to fish the area. Sometimes getting sidetracked fly fishing for Redfish on the coast but was always drawn back to the White River area.

In 2006, I decided trips were not enough; I sold my house, left my business and moved to the White River Area to pursue a career in fly fishing. Not long after making the move I joined my new fly fishing family at Mtn. River Fly Shop in Cotter AR, which is now known as Dally’s Ozark Fly Fishers.  They began letting me cut my teeth on guide trips with kids to Dry Run creek and teaching them the fun of fly fishing.  I soon bought a Drift boat & began guiding on the White & Norfork Rivers in 2007.  In the summer of 2007, I found myself guiding at the Rocky River Lodge in Port Graham, Alaska for Salmon & Dollies season & again in 2010.  Meanwhile, I worked the rest of the year at Dally’s Ozark Fly Fishers and guiding part time.  Over the last couple of years, I have found myself so busy with guiding that I have not been able to work in the Fly shop full time.   I am now finding myself overwhelmed with the pursuit for big fish on big flies.  I guess the bottom line is there’s no better place to be than in the boat with a customer sharing this sport.  I love my job!

I had no idea that my move from Mississippi would land me on such a fast track to such an awesome fly fishing career.  Now being an ambassador for Simms Fly Fishing and being picked up as a Rio ambassador and being picked as a Fly Designer for Umpqua Feather Merchants, this move has been the best thing that has happen to my wife, Tiffany, and I in the last few years.  Thanks to all of the support of the fly heads out there.

\
Chad and I met about 11 yrs ago in the Fly Shop . The next day I was fishing on the river when Chad and Tiffany came over and asked if I would like to go with them in there boat fishing . I said yes of course . They told me it was Tiffany's Birthday which is the same as my wife's . After that I have fished with Chad every year. I have a bond with him that goes way beyond fly fishing . He is more than just a guide. He has been a life saver for me. Now he guides my son. He is the Best. Thanks my friend .
- Gary Wood
I have fished with Chad “Mississippi” Johnson on two different trips to the White River and will request him on future trips. Both trips were phenomenal and on our last trip Chad was able to get us on a large number of fish even when water level was horrible. However I am still troubled that he allowed my wife to catch the largest fish, the first fish, the most fish and the only category win tagged to me was weirdest fish (catching an elusive sucker fish #winning). I have fished with many guides on many rivers and I can say that Chad really has a gift helping fly-fisherman improve their casting skills by the end of our trip my wife was consistently throwing 50 foot of line with Chads guidance. If and when you fish with Chad be prepared to learn many fishing acronyms such as (LDR) long distance release and if hopper fishing always I mean always say Mississippi before setting the hook. A trip with Chad will be one to remember.
- Brent Snyder, Tx
I discovered the fly shop about 4 or 5 years ago. They always have the stuff and the info I need to have a good trip. A few years ago they recommended Chad Johnson as a guide I would like. They were right! Chad has always worked hard to see to it I have a great fishing trip. He knows where the fish are and how to work with my skill level to help me put them in the boat. Chad always makes me feel like I'm improving as a fly angler even though I know it not always true. Patient and encouraging never makes me feel bad about blowing it. Most recently he helped me get my son into fly fishing by putting him on a nice 20" brown. And his wife Tiffany fixes the best lunches. Always something special in the lunch box.
- Barry Turner, LA
I have known Chad for a while and his great reputation proceeded him. As a honeymoon gift for my wife(no that's not a joke), we decided to book a fly fishing trip with Chad. My wife and I are both decent at fly fishing, but I thought a day on the water would be relaxing and we would also be able to fine tune our approach. Catching fish was a given, but Chad took it further. He helped us both with casting and fishing techniques. He was very patient and fantastic at helping us improve. Mix in a few fishy stories and laughs along the way and we couldn't think of a better way to spend the day. Chad and all the group at Dally's are always very friendly and highly skilled. Cant say enough good things about them. Thanks for the great memories and looking forward to doing it again. Zach Hoyt

- Zach Hoyt, AR
I have fished with Chad for 10 years. It's still fun and I'm still learning. And that's why I'm still coming back 2-3 trips per year. Chad is always understanding of my physical limitations due to aging and is always respectful. Oh yeah, we catch fish, lots of fish. We always have a good time, a fine young man. Larry Pitts
- Larry Pitts
SHOP
FISHING
REPORTS
GUIDES
WATER
FLOWS