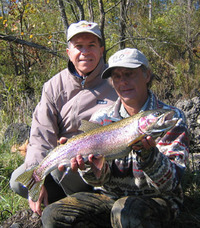 I always feel incredibly lucky that Davy Wotton is part of our extended family around this fly shop. Davy has devoted his life to fly fishing on two continents and legitimately should be regarded as an international guru.

He has many, many flies in commercial production both here and in the UK, was an innovator in the fly tying materials business, a writer, photographer, entomologist, casting instructor and out standing all around fly fisher.

I've been asked a bunch of times by people, does he really know that much?, well the simple answer is yes, and its knowledge learned from years of obsessive water time and sitting at the vice. Davy also supplies many of our most productive custom patterns, his Sowbugs are standards as are his Super Midge series. His Master Tying Classes are not to be missed. Its also a lot of fun having him as a friend.

A little History on Davy:

"My fly fishing days began in the 1950s fishing for wild browns on a river that ran through the family farm in the western region of the UK.

While at school l was given some fly tying material which further spurned my interest, not to mention the availability of fur and feather that l obtained from the creatures that frequented the local countryside, that also created my interest in hunting.

In the late 60s having achieved fly tying skills l started to produce flies for a local fishing tackle store, that lead further to being asked to write regular fly fishing articles for a fly fishing publication that further encouraged me to set up a mail order business selling flies, that then lead me to expand my business to include fly tying materials and then fly fishing products.

In the early 80s my interest l started to process fly tying materials, learning how to take care of raw material and dying material. In those days the availability of dubbing material was limited more so to natural material such as mole, rabbit, seals fur and only available in limited dyed colors. That furthered me to spend time developing a new ranges of dyed material using at that time natural fur. The first of which was the Davy Wotton hare fur dubings in 12 colors.

Also at this time l was being booked to give both fly tying and fly fishing lessons and guides services both for rivers and stillwaters, both in the UK and overseas. Ultimately that took me to very many countries around the world demonstrating my skills and teaching fly fishing. It also got me interested in competitive fly fishing events which were more or less at that time confined to the UK, now on a worldwide basis. During those 18 years l won many events, it also furthered my development of new fly patterns and techniques for fishing, over and above what was then the accepted standards.

During the 80s seal fur which was more or less the standard for very many flies became very difficult to obtain. That got me interested in so far as how synthetic materials could be utilized. In consequence after 2 years of research and figuring out combinations of what materials and blends to use, SLF was introduced into the world market. My company expanded rapidly to be able to support the international demand.

More or less l have fished every State in the US, guided anglers at many destinations around the world, worked for and produced many fly fishing shows for national TV networks, alongside my own Fly Tying and Fly fishing video and DVD programs and well over 300 articles published in International fly fishing publications and fly fishing forums.

It was my good friend Dave Whitlock who first introduced me to the White river system, to say the least l was hooked by the resources here in Arkansas, and in consequence decided l would move here from what was at that time my homes both in Wales and Chicago.

Since that time l have introduced for the White river system many new fly patterns not to mention bringing with me the many of the traditional and techniques established back in the UK during the 1800s, and those of a more modern concept generated by the international world of competitive fly fishing.

It is the way of the wet fly that holds a passion for me more than any other fly fishing technique, sadly today a technique not often used or understood, but it is one of the most deadly ways to catch trout no matter in what water they live if the prevailing conditions are conducive to its use as is the case for any other method on its day."
SHOP
FISHING
REPORTS
GUIDES
WATER
FLOWS