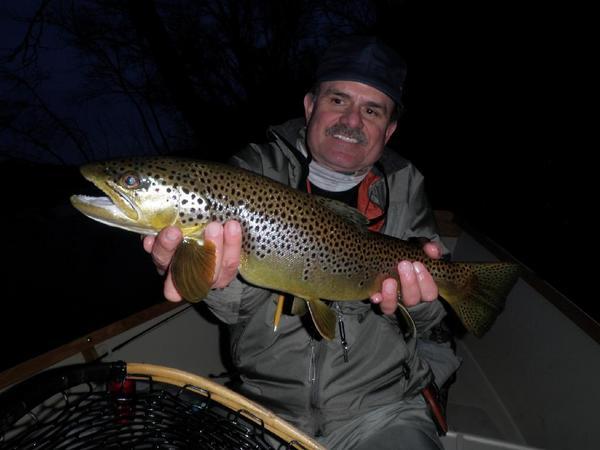 Starting in the mid to late 50's Marc began fishing popping bugs with his father on the upper White, War Eagle, and Osage Rivers in NW Arkansas. This kindled an interest in fishing that gets brighter every year.

After high school in Tulsa, college at OSU, and a term with the US Navy; Marc was free to pick the places he spent time. Most of these were chosen because of the fishing available.

Twenty two years ago Marc returned to the White River Basin which he considers home. The desire to spend more time on the rivers finally pushed him to move to Cotter and to pursue a career in guiding people in this area we call the Ozarks. He has discovered that he gets much enjoyment and satisfaction out of putting people on fish and helping them to catch those fish. Helping clients develop the skills and predatory instincts to be successful on their own is a top priority.

Marc has been accused of being meticulous in the ways he approaches his fishing and tackle preparation. To him this is part of the fun and adds to the passion for the places and people that come together in pursuit of game fish. Wade fishing is his first and favorite way to fish.( because it satisfies that hunter-gatherer instinct). But on these waters many times a boat can be a necessary tool.

For that reason he has a 20ft. motorized Jon boat and a 16ft. drift boat. Marc does not adhere to the "9 to 5" schedule for guiding. If conditions dictate, he will be on the water at 5am or 8pm and even at night if that is what it takes. Known for his humble and sincere nature Marc invites all who are interested to come fish with him.