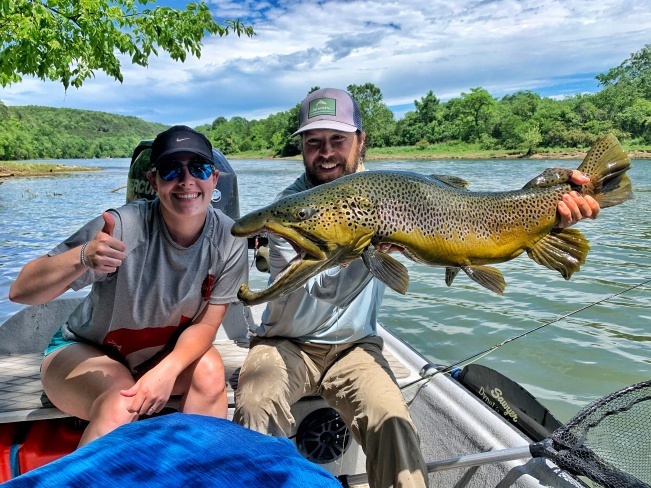 Ben Levin used to be known as "The Kid" around the crusty older types here at the Ozark Fly Fisher, before the beard, but he's packed more fly fishing experience than most twice his age.

Getting Ben into the team here was a huge bonus.  He's been a fishing buddy and worked with some of our guide team for years and we finally wore him down. You will really enjoy meeting him in the shop as well.  We like to say he is the nice one.

Ben Levin was born and raised in Arkansas on the headwaters of the Mulberry River, and started chasing fish, crawdads, tadpoles, turtles, snakes, and all other manner of creatures in creeks and puddles since he was old enough to walk. He has been catching trout and smallmouth bass on fly rod in the Ozarks since age eleven. Having spent most of his childhood exploring every nook and cranny of Ozark creeks, rivers, tailwaters, and reservoirs, Ben has a special passion for his home waters. He has been guiding fly-fishermen on the White River system since age fifteen.

Between college semesters, Ben spent four seasons working and guiding for South Fork Outfitters on the Snake River, and Mike Lawson’s Henry’s Fork Anglers on the Henry’s Fork in Idaho, one of the most famous and challenging dry fly rivers in the west. He has also traveled all over the Rockies fishing in Montana, Wyoming, Colorado, New Mexico, and Utah. He was a member of the US Youth Fly-fishing Team in ’98 and ’99, and competed in Ireland and Wales. Ben has been longtime friends with local fishing expert and renowned artist Duane Hada, and the two often team up to float people down our smallmouth streams.

Since graduating in 2005 from the University of Arkansas in Fayetteville with an honors degree in English, Ben has been guiding full time here in Arkansas on our local waters. He lives on Crooked Creek, our famous smallmouth fishery and major tributary of the White, where he fishes, writes, takes pictures, hunts critters, and spends time with his chocolate lab, Soco.

Ben will be doing both smallmouth and trout trips for us, whether it’s in a canoe on the creeks, or his jon boat or drift boat on the river. He’s also a heck of a fly tier and supplies several of our custom patterns. You'll enjoy meeting Ben.

\
My son and I recently fished the White(11/16/2013) with your guide Ben Levin. Ben was an excellent guide and he made our trip exceptional. My son had never fly fished before and Ben was extremely patient with him and he taught what he needed to know to catch fish. He was extremely courteous but most of all he knew the river and where the fish were to be found. If he told us to be ready we would certainly have a strike. By the end of the day we had caught numerous fish, probably about 25 to 30, and we were both very pleased with the results. The only thing lacking was a BIG BROWN, but after all, the quide is responsible to see that we have fun and catch fish not for the size. I would certainly recommend Ben as a guide and we plan on returning to the White for further adventures with him. Also I want to tell you how impressed I was with your shop. It is probably the nicest and best stocked fly shop I have experienced in a long time. I just wish I could have had more time to walk the aisles and stock up my tying materials as well as dream about my next rod.
- Dean Kahney, TX
SHOP
FISHING
REPORTS
GUIDES
WATER
FLOWS