You, the customers, are why all of us in the team get up out of bed and come to work with a grin on our faces. It is your enthusiasm to fish, your dedication to the fly rod, to drive and fly in many cases hundreds of miles to pursue this weird obsession that inspires us too.  We are privileged to be able to share it and to help you get the most out of your White River experiences.  We want you to love this place as much as we do.

Faye Clark - Faye is indispensible around here. "Miss Faye", as she is known in the Southern way, is the one who returns order to chaos.  As our office manager, she is the one to convert the boys scribbled notes, vague ideas and "get thing done first" approach into standard business and accounting practices. Miss Faye is often the first voice you will hear if you call the shop, and runs our Online Store, getting your orders packed and sent out fast. If you have shopped with us previously you will have received her "smiley face" handwritten notes accompanying your order.  She is also a true local having been born and raised along the White River.  Faye couldn't be better suited as the voice of reason among the fly fishing lunatics around this place, having learnt her craft after marrying her husband, well known tier and fly fisher Mike. Mike is another of our extended family around the Ozark Fly Fisher who pitches in, when all our guides are on duty and we need a reliable hand in the shop.

Steve Dally - Steve has worked in various sectors of the industry: media, marketing consultant, and guide since 2000, including the last 15 years in fly shops on the White River system, largely in managerial roles. Steve is a signature fly designer with Rainy's Flies for his conception of Dally's Tailwater Jig, Dally's Tailwater Soft Hackle, Dally's Lap Dancer, Dally's Tiny Dancer, and Dally's Twerking Minnow.

Chad Johnson - Chad Johnson might have been raised in Mississippi but fast established a reputation as one of the fishiest guys on the White River.  Chad, or "Mini-Guide" as he calls himself, is a huge part of our team with a personality way bigger than his frame.  He fishes hard-core, anytime, any weather, for any species, and is unforgiving on his equipment so the stuff he recommends works and will take some abuse.  As our Head Guide, Chad spends more time on the river guiding than in the store these days but remains a core member of the team and as Director of Education runs our classes and programs. Chad is a signature fly designer with Montana Fly Company for creating CJ's Sluggo, CJ's Big Johnson, and CJ's Freaky Frog.

Morgan Guss - Originally born a raised in the South Bay of Los Angeles,CA, Morgan Grew up chasing waves and rays. After a childhood filled with travelhockey and beach parties Morgan made his way to Tempe AZ, where he went toschool studying civil engineering at Arizona State University. As college beganto take precedence hockey took a back seat and a need for a study breakactivity emerged. Fly fishing the small city park ponds for bass, and carp wasan easy solution that would soon take Morgan further and further from the cityand into the Northern Arizona mountains in search of trout. Fly fishing soontook a hold and the books were being opened less. After a few years of chasingdesert trout it was time to make a move. Morgan packed his bags and headed upto Steamboat Spring, CO where he would begin his guide career, learning theRocky Mountain trout ways. After spending 5 years guiding and 4 years in thelift operations department at Steamboat Resort it was again time for a move. Withfly fishing now such a large part of Morgan’s life it was time to abandon tothe snow covered peaks and look for a more year round fishing option. Cotter ARisn’t on many western peoples radar but it sure was on Morgan’s. In 2020 Morganmade the move to Cotter to pursue a more steady career in the fishing industry.Now guiding on the White and Norfork rivers, as well as playing an integralrole in the fly shop Morgan has not looked back. The beauty and abundance ofmixed fisheries in the Ozarks has truly stolen his heart. From trout fishing tosmallmouth, carp, pan fish and many more, if Morgan isn’t in the shop helpingcustomers make the most of their time on the water you can be sure you willfind him chasing fish somewhere.

Luke Coffey - Born and raised in the extreme northwestern portion of the Ozarks Plateau, Luke Coffey is no stranger to his biospheric surroundings.  He is known simply as Luke to friends and family.  Often there’s an ole, as in good ole, adjective injected in that nomer.  That’s due to his reputation as a personable and down right likeable fellow.Luke earned his formal education in the small, rural public schools of this region as he tagged along with mom and pop along their career path as educators.  He was quite active in various school activities from the onset of this schooling.  After high school he toiled a few semesters at a local junior college.

Most would say his real education began after his JUCO days.  That’s when he enlisted in the U.S. Air Force.  Luke served our country for over six years in this role, with multiple deployments to the Middle East and Afghanistan.
After military separation, Luke once again went the higher learning route, attending Oklahoma State University.  After OSU, Luke moved on to his real passion.  That love began in boyhood days with fishing rod and line tethered not only to his hands, but also his heart. This hobby would evolve into his career.
Luke has been sharing his love of the angle through guiding service for going on a decade now. This occupation has taken him from the clear streams of the Ozarks, to the wilderness of Alaska; and back, several times. Look him up if you want to experience this natural high. You’ll probably find him out on the river. And yes, line and rod will still be attached to both hands and heart

Adrian Hubbard -Born and raised in Mountain Home, Arkansas, Adrian is by definition a "true local". He spent most of his childhood catching sculpins and crawdads while camping out on the Buffalo River. His father, an avid outdoorsman and even a local river guide for a short time, helped him develop a unique outlook on the water system he calls home. Having had a Jon boat since the age of sixteen, Adrian is intimately familiar with the White and Buffalo rivers and loves helping people create their own unique experiences.

Spending time on the water has always been a passion, but only recently became a career. Directly out of high school, Adrian went to work as a mechanic and has done everything from managing a small automotive shop to running a service truck for heavy equipment. He jokingly claims to be retired now and the only time you will catch him holding a tool is when assembling his daughter’s toys or completing his wife’s to-do lists. Adrian is a proud family man dedicated to sharing the joy of the Ozarks with all ages. Whether you are looking to introduce your family to fly fishing for the first time or a seasoned angler looking to target brown trout, you can rest assured that you will be met with a smile and old-school southern hospitality. 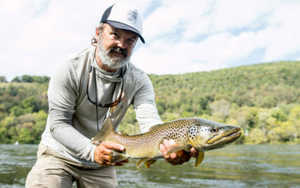 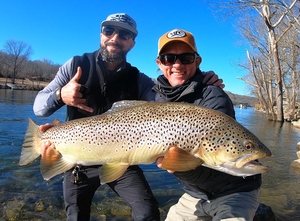